The children in Year 3 should all be so proud of themselves. Today, they each came up to the front of the class and bravely performed a poem of their choice. It is such a nerve-wracking thing to do but I was so impressed by the children's confidence and ability to overcome their worries. We still have a few more poems to listen to before the finalists are revealed.

The children looked at a map of St Albans from 2020 and compared this to a map of the same area from over 200 years ago. We noticed that some things had stayed the same (Cathedral, River Ver, London Road, Sopwell Nunnery, Holywell Hill) and a lot had changed. There are now lots more houses and less green space. 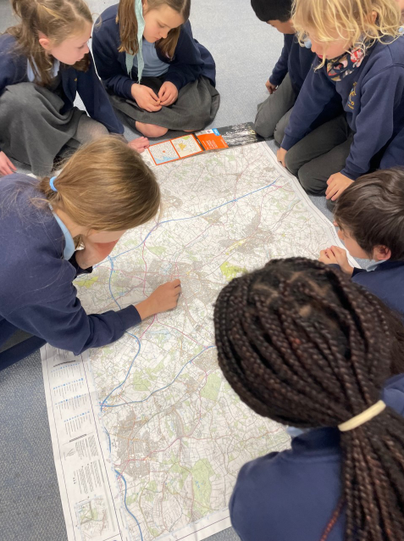 Some members of our class are celebrating Chinese New Year at the moment and brought some special items in to show us during circle time. The children really enjoyed seeing and sharing. 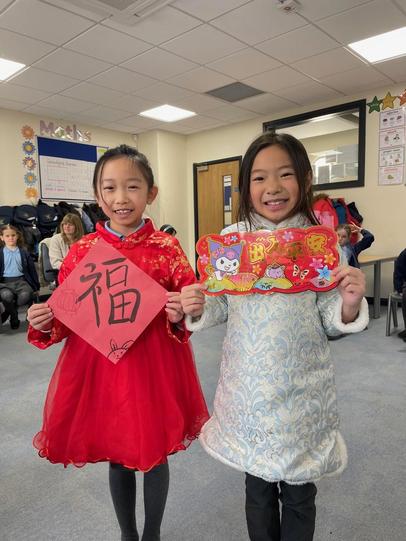 We started our new unit in English today. We are building up to write our own newspaper reports related to The True Story of the Three Little Pigs. The children used the 5 W's (who, what, when, where and why) to pick out the key points from a news report and then looked through examples of First News newspapers! 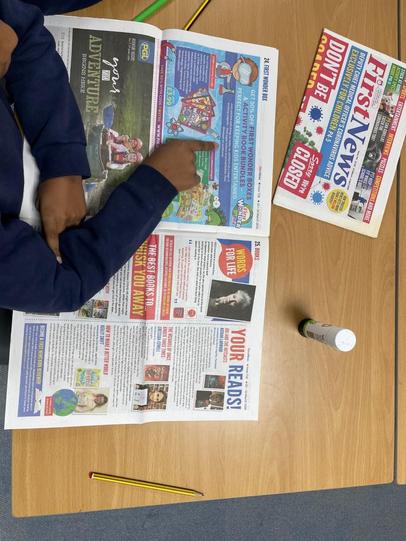 We read the poem, 'The Hippocrump' and discussed the vocabulary that tells us what he looks like. The children used oil pastels to create their own versions of The Hippocrump which look amazing! 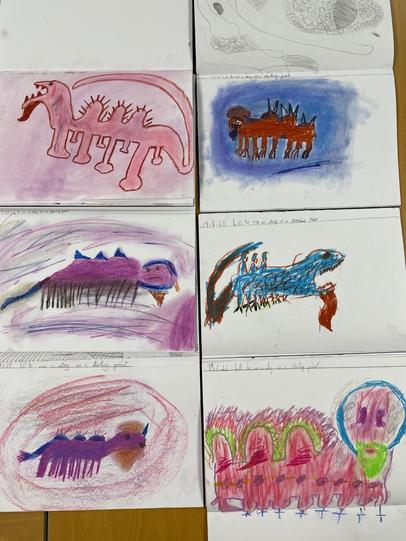 As part of our new Computing unit, we gathered data about Year 3's favourite ice cream flavours. The children then inputted the data into a spreadsheet using 2calculate and then created a bar chart to present their data. 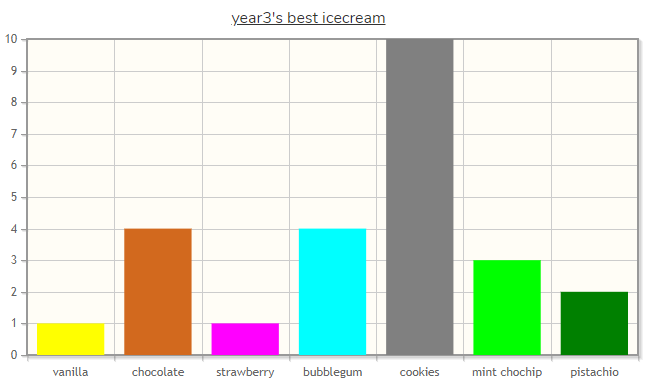 Why do Places Change?

In our first Geography lesson of the year, we looked at photos of two different places before they experienced a huge change. The village of Glenridding was flooded in 2015 and the London Borough of Newham was transformed for the 2012 Olympics. The children labelled physical and human features, showed the position of each county on a map and then described the changes. We then had a discussion about how one of the changes had a positive impact and people had control over it, and one had a negative impact that people had no control over. 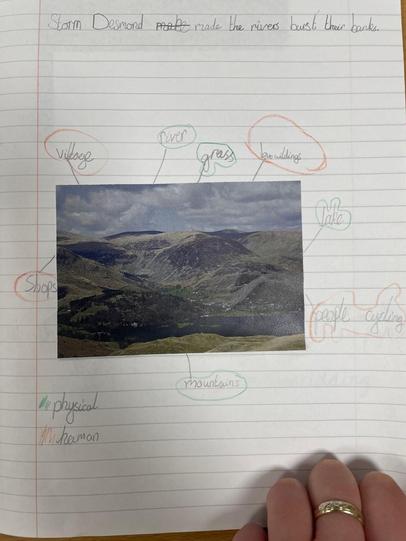 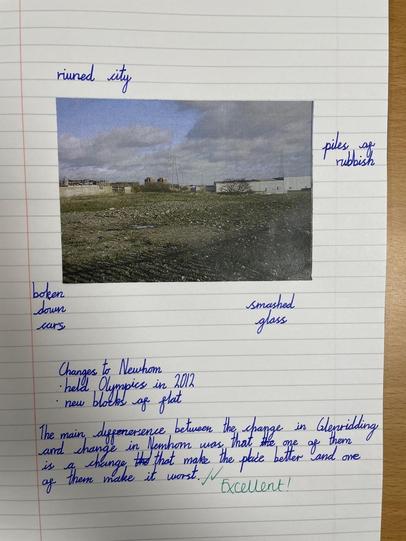 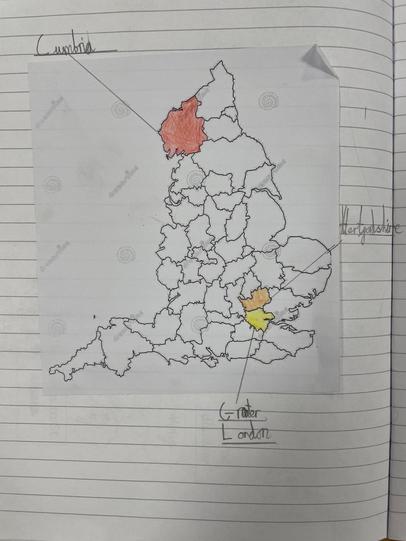 I hope you all had a relaxing break and are feeling refreshed for the start of 2023. The children have settled back into the routine really quickly and all seem happy to be back. We will start Gymnastics sessions this afternoon alongside our other weekly PE lesson with Mr Morgan on a Monday.

This morning, we took part in the Santa Run for Herts Young Homeless. If you would like to make a donation, please see the latest Newsletter for a link. 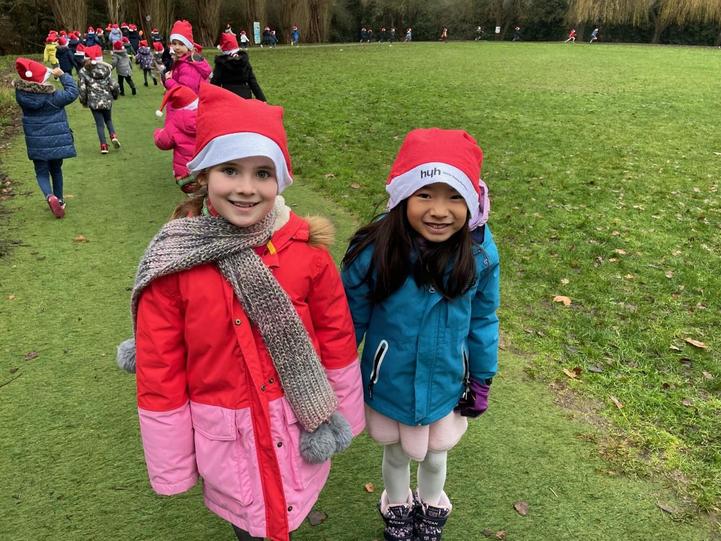 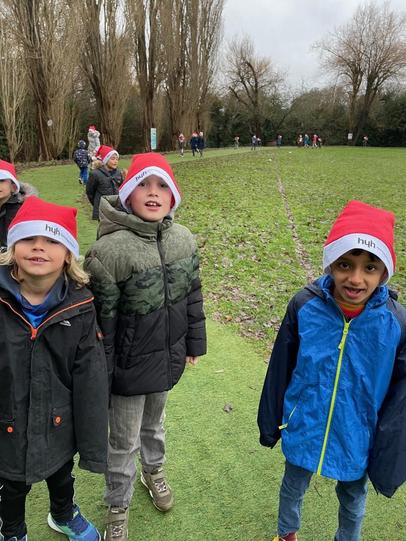 After learning all about how Stone Henge was constructed last week, today the children used their teamwork skills to recreate it using biscuits! They included the sarsen and blue stones, working out how to balance the stones on top and get them to stand up straight. 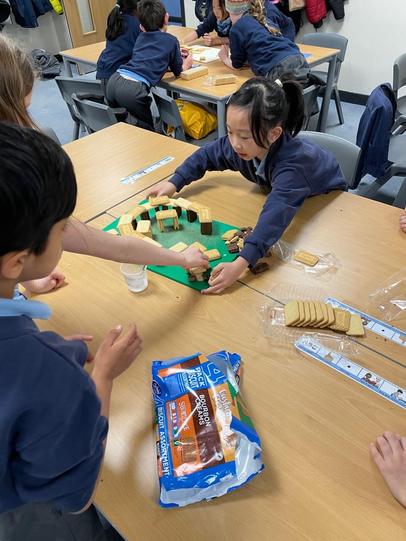 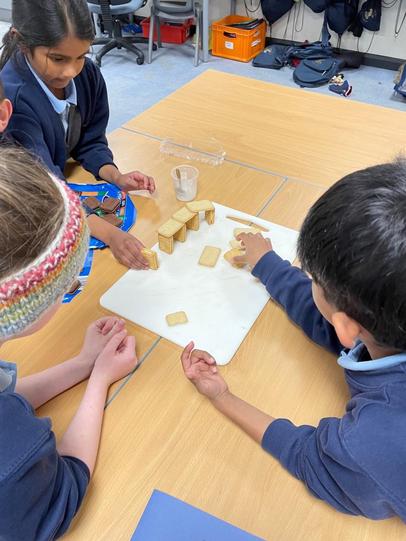 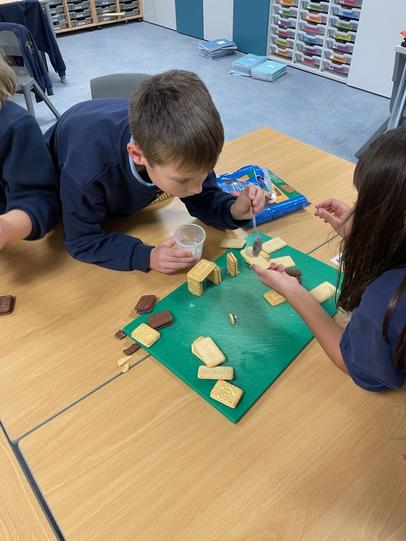 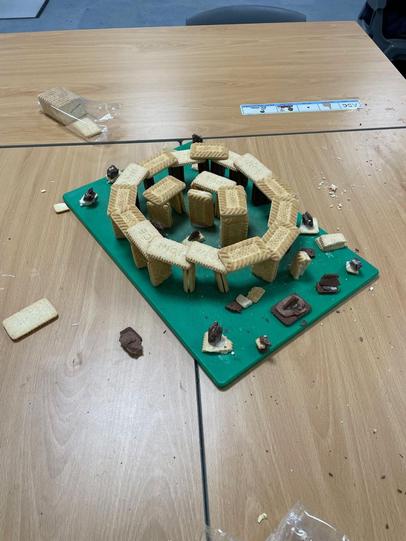 Having been introduced to the process of fossilisation last week, this week children deepened their understanding further. We used the index of various non-fiction texts to locate information about fossils and discussed the key scientific vocabulary that is useful when describing the process. 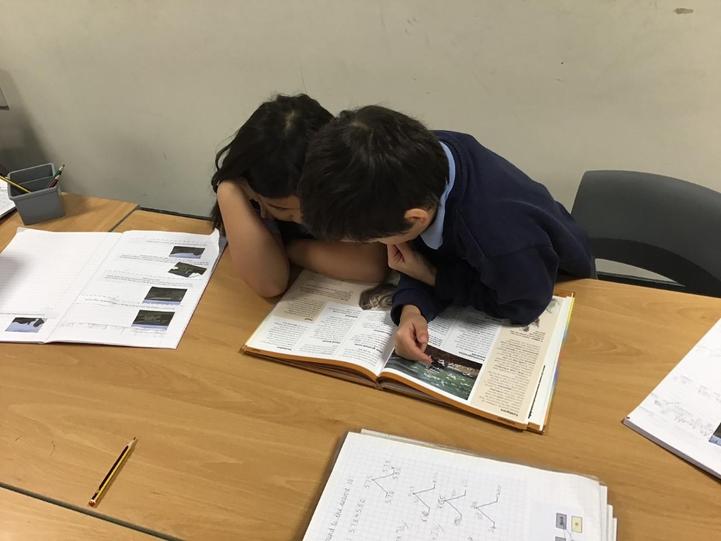 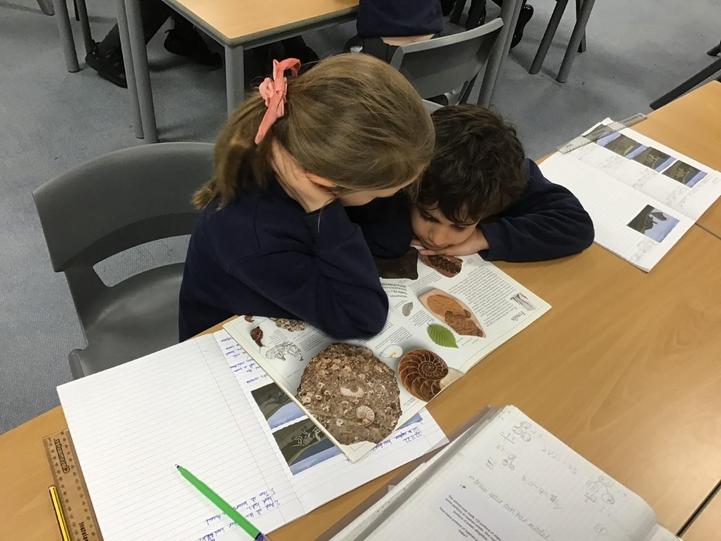 After a number of weeks learning and rehearsing mental strategies of addition and subtraction, we have now spent time on the formal written methods. The children have made a huge amount of progress and are confident with calculations where they need to use regrouping. 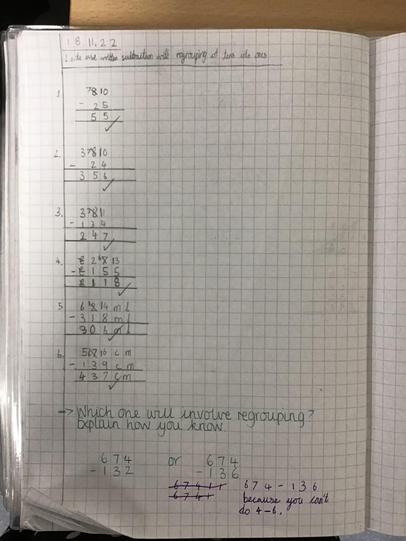 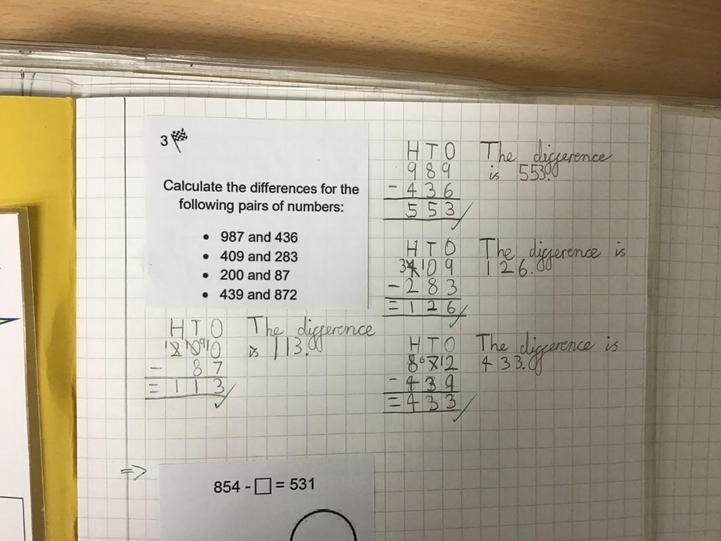 To kick off antibullying week the children designed their own pair of odd socks. Odd socks day is an opportunity for people to express themselves and celebrate that we are all unique. Lots of children also wore odd socks too! 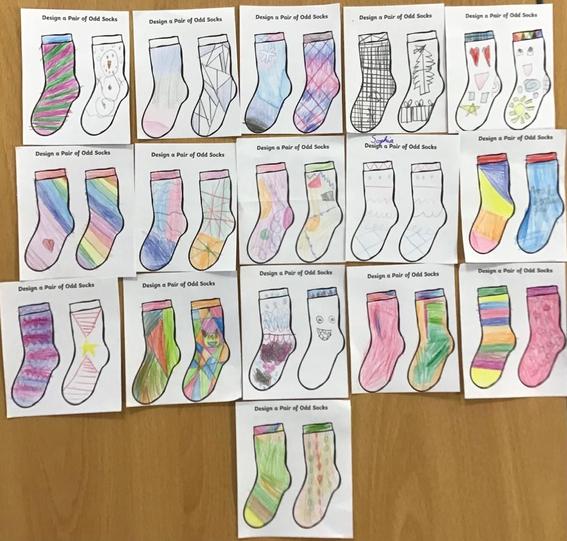 This morning, Year 3 took part in a Drama 4 All workshop. The children went on an adventure that involved making a magic potion out of different ingredients including fairy dust and chocolate. They ate all of the dragon's chocolate muffins and did the opposite actions to save themselves. We had a great time and there was a lot of laughter. 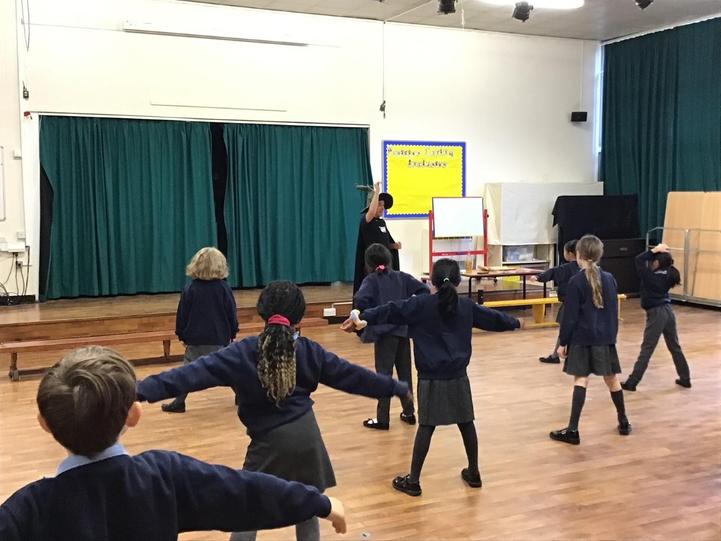 We were lucky enough to welcome Gautama's Mum into our classroom this afternoon to talk to us about Diwali (the festival of light) which happened during half term. We talked about the different stories of Diwali and then had a go at making our own rangoli patterns to welcome Lakshmi. Thank you SO much for coming in and sharing with us. 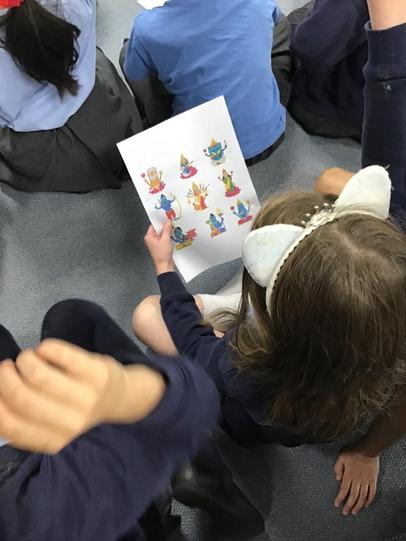 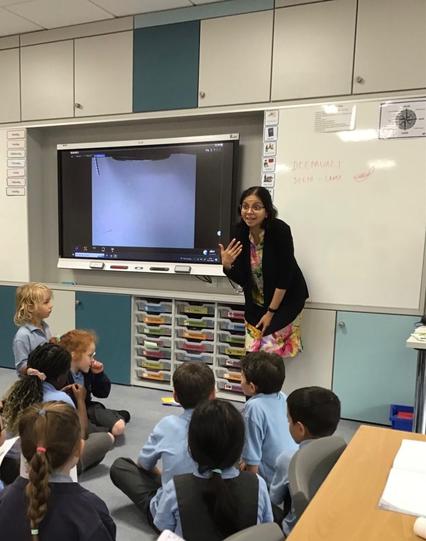 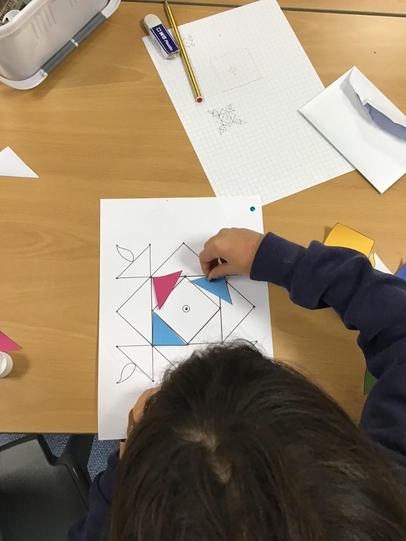 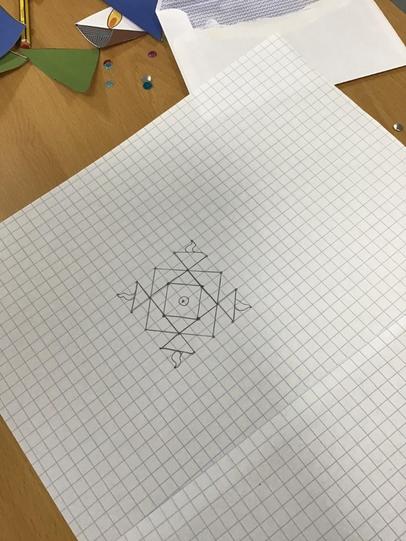 The Bear and the Piano

In English, we are looking at the book, 'The Bear and the Piano' by David Litchfield. Yesterday, we explored new vocabulary from the blurb and made predictions based on the image on the front cover. We will explore the theme of temptation throughout this unit of work. 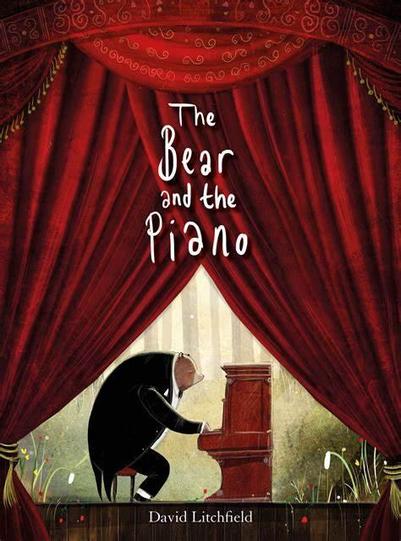 We had a lovely afternoon in the sunshine developing our tag rugby skills with Mr Morgan. The children had to attack, defend, pass and score tries in teams. 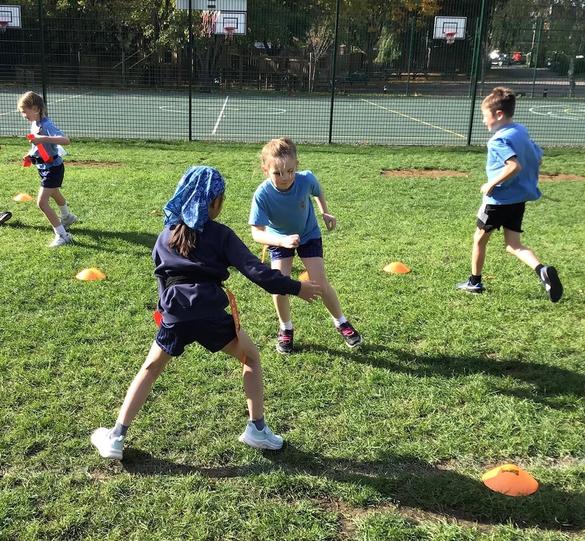 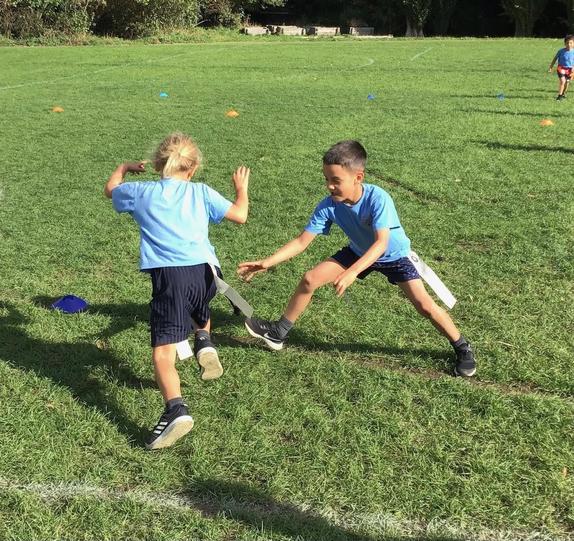 The children used lolly sticks to press a pattern into a piece of polystyrene. They then inked up their designs and printed these into their sketch books.

We have moved on from place value and are now looking at various addition strategies. The children worked hard to master the 'think 10' method when adding ones to 3-digit numbers. This method relies on children's knowledge of number bonds to 10 as well as regrouping. 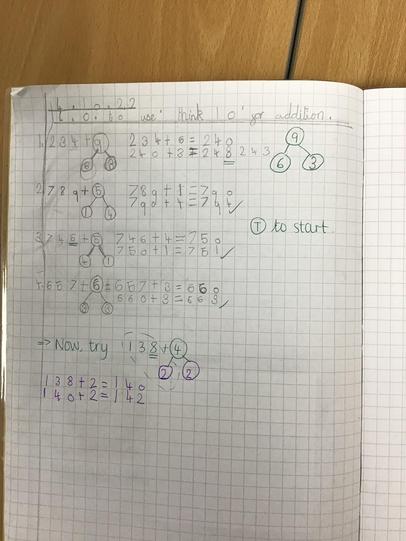 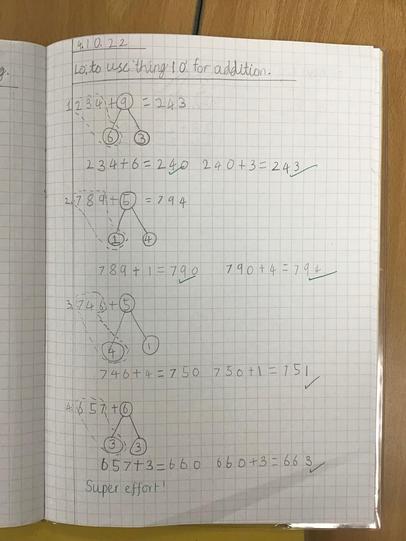 We had a lovely afternoon exploring texture through printing. The children produced some beautiful artwork using Lego, netting, beadstring and even a tennis racket!

In PSHE last week, we talked about what our 'dream school' would look like, how the children would feel and what they would be proud of. We then used the book 'We Are All Born Free' to introduce the UN's human rights in a child-friendly manner. This week, the children discussed what our responsibilities are as part of the St Peter's community. They also noted down rewards and consequences for making responsible and irresponsible choices. Some of the rewards included feeling proud of yourself, feeling happy and receiving positive comments. Consequences including feeling unhappy and possibly getting hurt as a result of an irresponsible choice.

We had a great day at Celtic Harmony where we watched a fire-building demonstration, built shelters for hunter-gatherers, tried hunting using training spears and learned about the types of plants and animals that people from the stone age would forage for.

In English today, the children imagined they were sitting around Om's family's camp from Stone Age Boy. We talked about our 5 senses and the children then wrote down what they could see, hear, smell, feel and taste. Tomorrow, we will use these ideas to write a setting description.

Today we were lucky enough to handle artefacts from the stone, bronze and iron ages. These included arrow heads, spearheads, coins and axe heads. We looked at pictures of early human shelters, roundhouses and cave paintings. Thank you so much to Mrs Hamilton and Mrs Boggis for organising the loan box from a local museum for us. We have already had claims of this being our favourite topic so far!

Welcome to our Year 3 class page. We have had a super start to the year and I have been impressed by the children's maturity and enthusiasm. A real highlight for the children has been using the gym equipment at play and lunchtimes. In Maths, we have been using different equipment to represent 3-digit numbers and have started looking at Stone Age Boy in English lessons.

Welcome back to the Spring Term at St Peter's
Top

Unfortunately not the ones with chocolate chips.

Some cookies are necessary in order to make this website function correctly. These are set by default and whilst you can block or delete them by changing your browser settings, some functionality such as being able to log in to the website will not work if you do this. The necessary cookies set on this website are as follows:

Cookies that are not necessary to make the website work, but which enable additional functionality, can also be set. By default these cookies are disabled, but you can choose to enable them below: